Why This Sound is Essential for Your Happiness

Imagine yourself at a concert. You are sitting in your seat, and on stage there are various acoustic and digital instruments awaiting the musicians. The audience hushes as a group of people walk onstage and position themselves next to some of the instruments. The lights dim and the music begins. 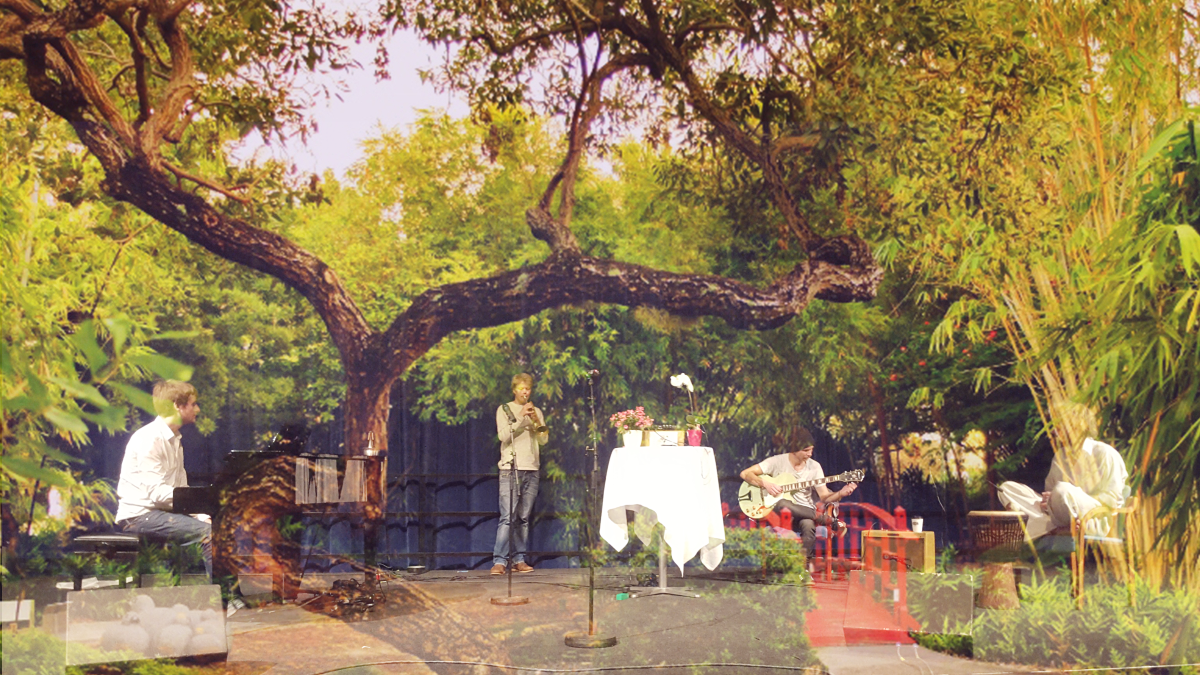 The music is like nothing you have ever heard before. The rhythm varies from note to note, the melodies sound other-worldly, and you notice that you hear some instruments playing without seeing a human playing them. Next to those instruments there are plants with cables connected to them, and you look down at your concert program to try to understand who is playing.

The list of musicians includes the traditional picture, title and mini-bio, but not all of the faces are what you expect. In reality, some of them are not faces at all, but instead pictures of plants with their species names and a mini-bio of their musical accomplishments. That is when you understand that you are at an interspecies concert with human and plant musicians.

You already know how most musical instruments work, but this could be your first time hearing about plant music, so let me explain. In the late 1970s, a group of researchers in a community in northern Italy called Damanhur started experimenting with communication with the plant world. As part of these experiments, they eventually built a device that allows plants to make music. This device, called the Music of the Plants, is a musical instrument for the plant world which they learn to play just like humans learn to play guitars and pianos and many other instruments.

When I first started researching plant music and plant intelligence, not many people had Music of the Plants devices. Most experienced plant musicians were from Damanhur, which for years has been organizing concerts and presentations. But since 2014, when a Music of the Plants exhibit won a bronze medal at the prestigious Chelsea Flower Show in London, the device is being sold worldwide, leading to a whole new generation of plant musicians.

I have had the privilege of organizing concerts and giving presentations on plant music communication around the world, and I am constantly amazed at the talent of many plant musicians. I say talent because just like humans, not all plants become great musicians. Even after hours of practice, some plants just don’t reach the levels of their more talented companions. And in some cases, a plant prefers to only sing in private, choosing to stay silent when in front of a crowd.

One time when I was in London preparing for a video-taped interview, we connected a beautiful jade plant that started making music right away. It was a simple melody, as it was her first time playing. She played the entire time we were setting up, but at soon as the record button on the video camera was pressed, she stopped making music. We decided to stop the recording to wait to do the interview with her music in the background, and she immediately started to play again. We hit record, and she stopped again. This went on several times until we realized she did not want to be recorded and decided to go ahead with the interview without her music. About half way through the interview, as I was talking about the various personalities of plants I have worked with and the importance of recognizing their true sentient nature, she decided that she wanted to add her voice to the discussion, and sang a very simple melody for the rest of the taped interview.

While not all plants are award-winning composers, some have joined interspecies bands and are going on to record incredible albums. Just the other day, I was sent a recording of a plant playing industrial drums with human musicians on medieval musical instruments and djembe. I have also been sent interspecies jazz concerts, intimate duets, and NatureFusion improvisations. There are human musicians playing modern music with their houseplants—begonias, peace lilies, spider plants—and others going deep into forests to play with the ancient sounds of nature’s oldest trees.

Each plant, while part of a greater collective plant consciousness, is an individual with its own personality, message, and sound. There are many ways to share knowledge with these timeless beings, but music seems to transcend the traditional barriers of communication. Music in and of itself is a language which resonates with our human DNA, and through this, plants are able to communicate without words.

Beyond artistic expression, the Music of the Plants device is being used by plants to experiment new ways to share knowledge, heal humans, and co-create environments. 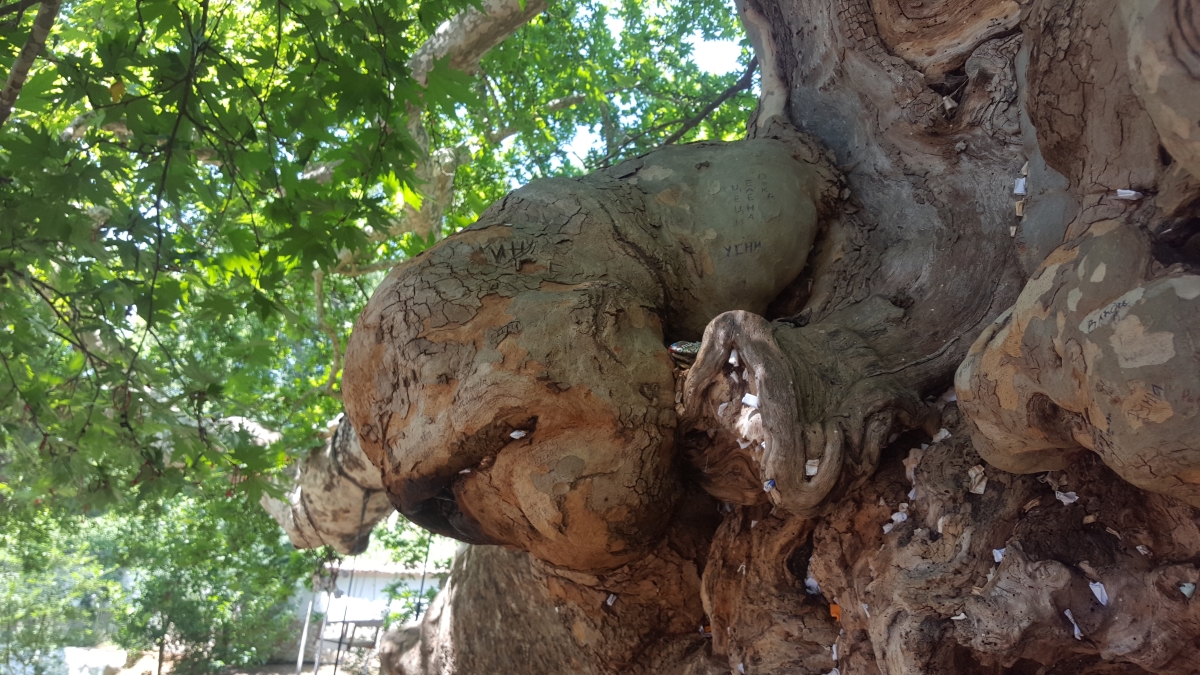 In 2016, I visited the garden sanctuary of Prepodobna Stoyna near Melnik, Bulgaria and listened to the music of a 1300 year-old Platanus Orientalis. This is a tree that is believed to have inherited the healing abilities of Stoyna—people come to sit under her branches and leave requests for themselves and their loved ones. It usually takes old trees a long time before they start playing given their size and the fact that most of their experiences with humans have not always been so pleasant, but this well-loved tree started playing right away. Sitting there, I could feel there was a message for me, and more importantly, for my Bulgarian guide. Through the melody, Platanus shared the stories of the people that come put messages in her bark and of the elementals that share her body. It was a gift to us from the tree.

Every culture in the world tells of the inherent connection humans have with the plant world. Science is finally starting to catch up to the wisdom of our ancestors with numerous studies showing the health benefits of plants in the city and the therapeutic effects of forests. Biophilia, as defined by Edward O. Wilson, describes the innate tendency humans have to seek connections with nature and other forms of life, while biomimicry teaches us how to learn from and use nature to develop products, process, and policies that are well-adapted to life on earth, which in turn keep us healthy and happy.

We have only begun to understand the importance of our relationship with the plant world and what it means to create a world with them instead of just using them. In my research, when we listen to plants, we can’t help but see the world differently—their wisdom unlocks a new way of understanding the interconnectedness of our existences. This integrated perspective between humanity, the plant world, and all the beings that share this world of form will lead to the co-creation of new cities where human, plant, and planetary needs naturally balance themselves in perfect harmony.