Citizen Science: Should I start an Interspecies Research Project?

Have you ever heard or participated in a Citizen Science project? As part of my Interspecies Research between humans and plants, one of the tools I use is the Music of the Plants device developed at Damanhur Spiritual EcoCommunity, where I live. When we started working with plant music, we thought we would be listening in on the internal “thoughts” (for lack of a better word) of plants. Basically, we thought it would be a one-way, closed stream of communication. Boy were we wrong!

Over the years, we started hearing how the plants changed their music based on what was happening around them. We noted differences when humans were nearby, and if the humans were also playing, the plant modulated the music in reference to what was being played. This lead to a whole new interaction between plants and humans through public concerts and private interactions. And then came the next surprise…

People started reporting health benefits after listening to plant music. Less colds, lower rates of depression, more energy… reports arrived from within the community at first, since that was the only place you could find the device. And once the device became publicly available, the stories increased. Healers and medical professionals started to use the device in their practices, creating personalized protocols based on their areas of specialization.

There has yet to be a formal research study on these effects. Individuals, such as Teresa Helgeson and Jean Thoby have carried out informal studies with a pre-determined protocol, and for this I am extremely grateful. So how can we get more research?

Since last year, I have been working with a team of doctors and researchers to carry out the first formal study on the effects of plant music on human health. A research study is a very long process, and after a year of work, we have finalized the protocol and plan to enter the next phase—identifying study participants—later this year.

In the meantime, the requests for more data keep arriving, so I thought there might be another way to gather data: 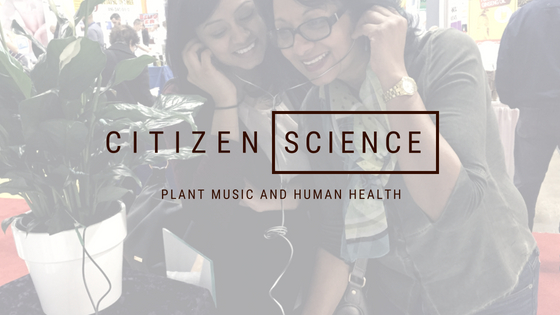 What if we were to put together a Citizen Science project to study the effects of plant music on human health?

For it to work, we would need a big pool of participants. We know that there are enough devices out in the world to accomplish our goals, but do Music of the Plants owners want to participate? Will new people get devices to be a part of this ground-breaking study?

So I turn to you…

Would you participate in a Plant Music Citizen Science project?

If you are interested, let me know by filling out the form below.